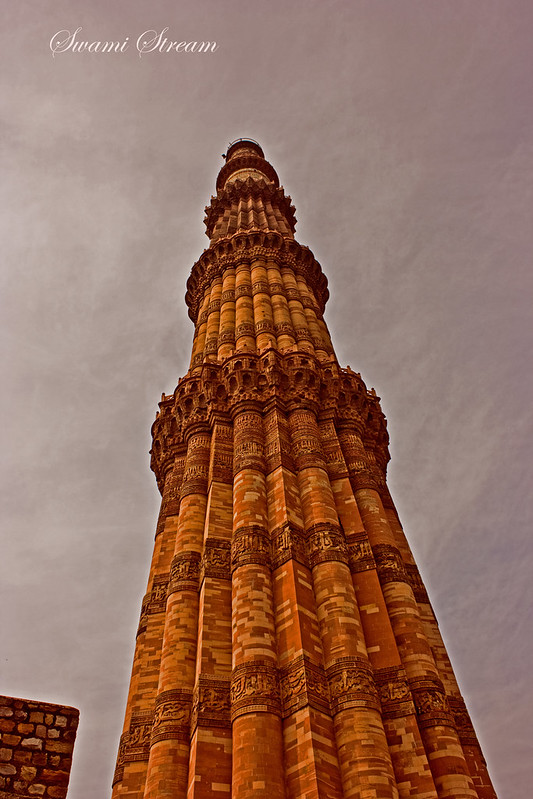 Qutub Minar (Urdu: قطب منار), a tower in Delhi, India, is the world’s tallest brick minaret.[2] Construction commenced in 1193 under the orders of India’s first Muslim ruler Qutb-ud-din Aibak, and the topmost storey of the minaret was completed in 1386 by Firuz Shah Tughluq. The Qutab Minar is notable for being one of the earliest and most prominent examples of Indo-Islamic architecture.

It is surrounded by several other ancient and medieval structures and ruins, collectively known as Qutub complex. The complex is listed as a UNESCO World Heritage Site and is one of the most popular tourist destinations in Delhi.

Inspired by the Minaret of Jam in Afghanistan and wishing to surpass it, Qutb-ud-din Aibak, the first Muslim ruler of Delhi, commenced construction of the Qutub Minar in 1193, but could only complete its base. His successor, Iltutmish, added three more storeys and, in 1368, Firuz Shah Tughluq constructed the fifth and the last storey. The Qutub Minar is itself built on the ruins of Lal Kot, the Red Citadel in the city of Dhillika, the capital of the Tomars and the Chauhans, the last Hindu rulers of Delhi.

Controversy also surrounds the origins for the name of the tower. Many historians believe that the Qutub Minar was named after the first Turkish sultan, Qutb-ud-din Aibak but others contend that it was named in honour of Qutbuddin Bakhtiar Kaki, a saint from Baghdad who came to live in India and was greatly venerated by Iltutmish.
More on en.wikipedia.org/wiki/Qutub_Minar
utab Minar going the way of the Leaning Tower of Pisa? Experts are understood to have expressed concern that the monument, which

Qutab Minar already has a tilt of 25 inches to the southwest, is in danger of leaning further in that direction due to a weak foundation being further weakened by rainwater seepage. More on economictimes.indiatimes.com/News/PoliticsNation/Qutab_Mi…
View on Black swamiflickr.blogspot.com/2009/01/qutub-minar.html