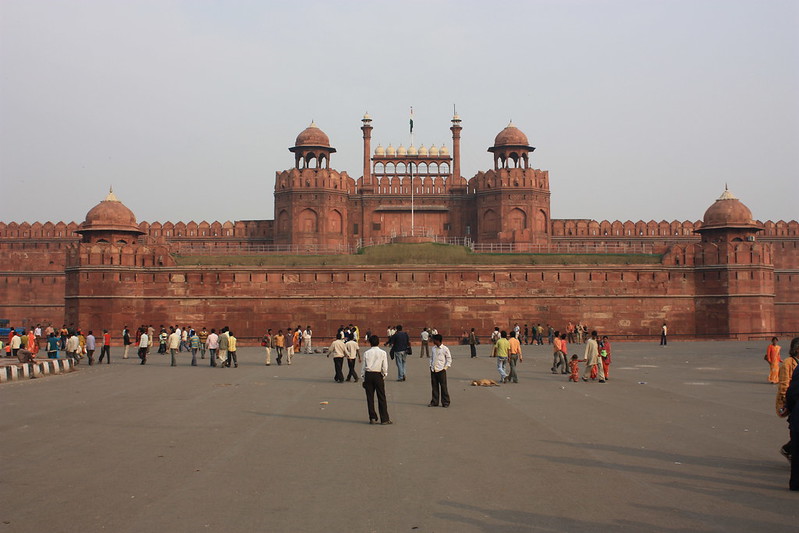 The Red Fort is located in the centre of Delhi, India. It houses a number of museums and was the residence of the Mughal emperor of India for nearly 200 years, until 1857. In addition to accommodating the emperors and their households, it was the ceremonial and political centre of Mughal government and the setting for events critically impacting the region.

Constructed in 1648 by the fifth Mughal Emperor Shah Jahan as the palace of his fortified capital Shahjahanabad, the Red Fort is named for its massive enclosing walls of red sandstone and is adjacent to the older Salimgarh Fort. The imperial apartments consist of a row of pavilions, connected by a water channel known as the Stream of Paradise (Nahr-i-Behisht). The fort complex is considered to represent the zenith of Mughal creativity under Shah Jahan and although the palace was planned according to Islamic prototypes, each pavilion contains architectural elements typical of Mughal buildings that reflect a fusion of Timurid and Persian traditions. The Red Fort’s innovative architectural style, including its garden design, influenced later buildings and gardens in Delhi, Rajasthan, Punjab, Kashmir, Braj, Rohilkhand and elsewhere. With the Salimgarh Fort, it was designated a UNESCO World Heritage Site in 2007 as part of the Red Fort Complex.

Emperor Shah Jahan commissioned construction of the Red Fort in 1638, when he decided to shift his capital from Agra to Delhi. Originally red and white, the Shah’s favourite colours, its design is credited to architect Ustad Ahmad Lahauri, who also constructed the Taj Mahal. The fort lies along the Yamuna River, which fed the moats surrounding most of the walls. Unlike other Mughal forts, the Red Fort’s boundary walls are asymmetrical to contain the older Salimgarh Fort. The fortress-palace was a focal point of the medieval city of Shahjahanabad, which is present-day Old Delhi.

The Red Fort has an area of 103.06 ha, enclosed by 2.41 kilometres of defensive walls, punctuated by turrets and bastions and varying in height from 18 metres on the river side to 33 metres on the city side. The fort is octagonal, with the north-south axis longer than the east-west axis.

The most important surviving structures are the walls and ramparts, the main gates, the audience halls and the imperial apartments on the eastern riverbank.

The Lahori Gate is the main gate to the Red Fort, named for its orientation towards the city of Lahore. During Aurangzeb’s reign, the beauty of the gate was spoiled by the addition of bastions, Shahjahan described this as "a veil drawn across the face of a beautiful woman". Every Indian Independence Day since 1947, the national flag has flown and the Prime Minister has made a speech from its ramparts.